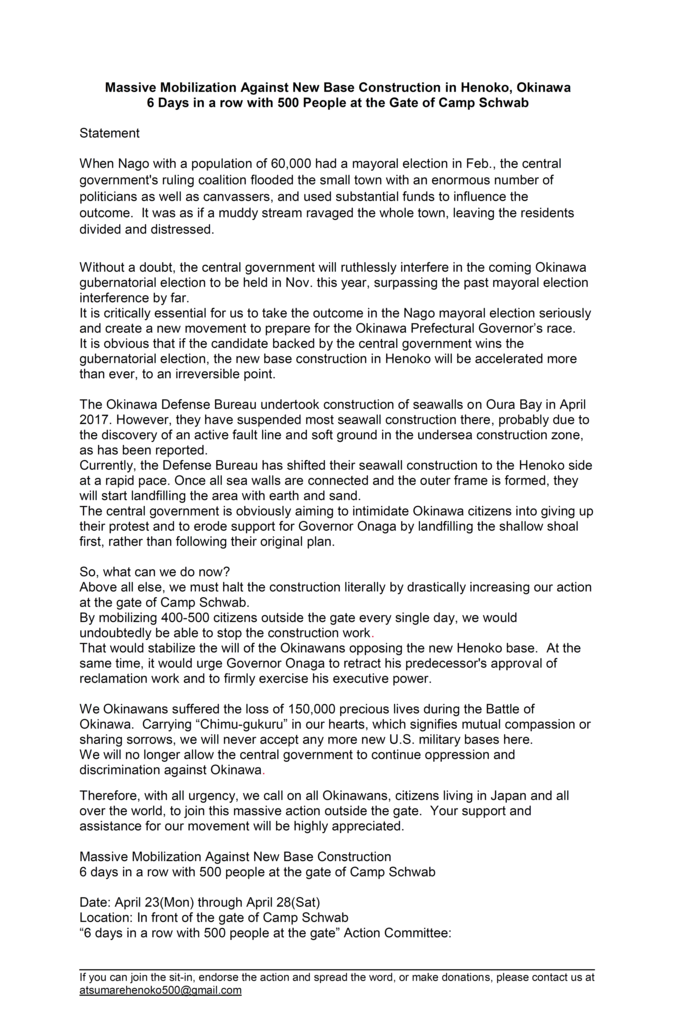 Statement
When Nago with a population of 60,000 had a mayoral election in Feb., the central government's ruling coalition flooded the small town with an enormous number of politicians as well as canvassers, and used substantial funds to influence the outcome. It was as if a muddy stream ravaged the whole town, leaving the residents divided and distressed.
Without a doubt, the central government will ruthlessly interfere in the coming Okinawa gubernatorial election to be held in Nov. this year, surpassing the past mayoral election interference by far.
It is critically essential for us to take the outcome in the Nago mayoral election seriously and create a new movement to prepare for the Okinawa Prefectural Governor’s race.
It is obvious that if the candidate backed by the central government wins the gubernatorial election, the new base construction in Henoko will be accelerated more than ever, to an irreversible point.
The Okinawa Defense Bureau undertook construction of seawalls on Oura Bay in April 2017. However, they have suspended most seawall construction there, probably due to the discovery of an active fault line and soft ground in the undersea construction zone, as has been reported.
Currently, the Defense Bureau has shifted their seawall construction to the Henoko side at a rapid pace. Once all sea walls are connected and the outer frame is formed, they will start landfilling the area with earth and sand.
The central government is obviously aiming to intimidate Okinawa citizens into giving up their protest and to erode support for Governor Onaga by landfilling the shallow shoal first, rather than following their original plan.
So, what can we do now?
Above all else, we must halt the construction literally by drastically increasing our action at the gate of Camp Schwab.
By mobilizing 400-500 citizens outside the gate every single day, we would undoubtedly be able to stop the construction work.
That would stabilize the will of the Okinawans opposing the new Henoko base. At the same time, it would urge Governor Onaga to retract his predecessor's approval of reclamation work and to firmly exercise his executive power.
We Okinawans suffered the loss of 150,000 precious lives during the Battle of Okinawa. Carrying “Chimu-gukuru” in our hearts, which signifies mutual compassion or sharing sorrows, we will never accept any more new U.S. military bases here.
We will no longer allow the central government